Due to the COVID-19 outbreak and the latest announcement by Prime Minister Boris Johnson on Monday evening, all events at Neuadd Dwyfor have been postponed or cancelled for the time being.

We are aware that many of our users will be disappointed but we hope that you understand the situation and the dangers relating to congregating in public areas.

The Box Office team will be contacting customers who have purchased tickets for events.
We are hoping to refund orders within the next few days.

Thank you for your cooperation and patience at this time. Pwllheli Library will remain open as usual at present with arrangements being reviewed daily.

Join us for an insight into the Welsh national football team with current Wales manager Ryan Giggs. From a glittering club career spanning three decades to the pressures of his first managerial role, Ryan will discuss his illustrious playing career and the transition into management.

Ryan will look back over the Euro 2020 qualification campaign, securing a qualification spot in the last match of the group and leading the country to a major finals tournament for only the third time in over 60 years. With five months until the opening Euro 2020 game in Baku, Ryan will discuss his preparations and hopes to replicate the success of the summer of 2016.

Compered by Ian Gwyn Hughes, Head of Communications at the Football Association of Wales, it promises to be a thoroughly entertaining evening looking back at Ryan’s fondest memories of his career so far.

In addition to the conversation between the two, audience members will get an opportunity to pose questions to the Wales manager during the evening. 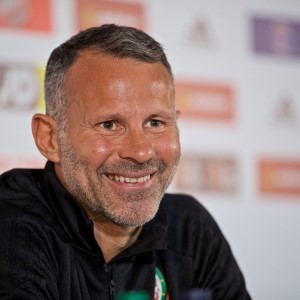